Truffles are underground fungi usually found in close association with a tree. Many species are rare, edible and as they are considered to be delicacies, are among the world's most expensive foods. There are dozens of different species, but the best species can cost over €10,000 / kilogram. A single white truffle was once sold for £165,000!

To reproduce, truffles rely on being dug up and eaten by animals and then spread in their dung. Their aroma attracts such animals and also appeals to gourmets. This aroma has been used by truffle hunters with pigs to locate this buried treasure. Today, it is trained dogs that have largely replaced pigs. On the continent and in other countries truffles are big business.

See The English Truffle Company searching for and talking about truffles as part of the Business Insider - "So Expensive" series. 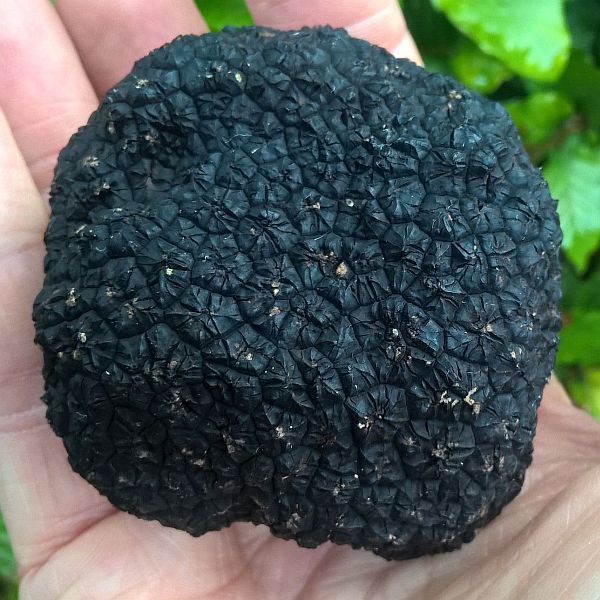 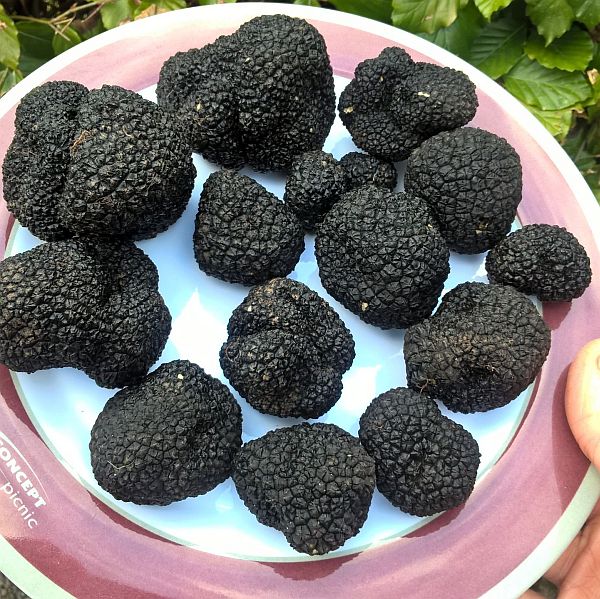 In England, a number of species of truffle can be found in the wild. While not as well known than as their continental cousins - The Périgord Black and The Italian White - they are still prized for their culinary value. Two types are of particular interest. Both grow just beneath the ground surface near beech, hazel, oak and birch trees and grow best on the rich soils found on chalk. The chalk downs of Kent, Surrey, Wiltshire and Hampshire were the centre of truffle hunting businesses in the 18th to early 20th centuries. The Wiltshire village of Winterslow, sometimes described as the headquarters of English truffles, had 13 truffle hunters. The last professional truffle hunter until recent times, Alfred Collins of Winterslow, retired in 1930. Working with two Spanish Poodles, he could collect 11 kilograms on a good day. You can read more on the history, in particular with reference to Wiltshire, Sussex and Hampshire here. Today, there is a growing interest in English truffles, be it in buying and cooking with them or truffle products such as oils, participating in a truffle hunt, growing them in a garden or commercial plantation or training your dog to find them. You can peruse media coverage about us and our truffles here. A great starting point is “English truffles: the hunt for black gold” published in the blog and magazine for wine and spirit merchants Berry Bros. & Rudd  who hold Royal Warrants for H.M. The Queen and H.R.H. The Prince of Wales.

The Summer Truffle (Tuber aestivum) is the commonest species in Europe. The skin is black in colour with pronounced pyramid-shaped warts. When cut in half, they have a white marbling on a pale cream to light brown background. Their season is May to August, though we would not recommend them early in the season when the flesh is light and aroma and flavour are minimal. They improve as the season goes on and the flesh darkens. The flavour, described as nutty-tasting, and aroma are more subtle than the well-known varieties but can still command prices of several hundred pounds per kilogram. Fresh English Summer truffles can be ordered here when in season.

The Autumn or Burgundy Truffle (Tuber uncinatum) is a very close cousin to the Summer Truffle with similar size, shape and colour. It is found in many parts of Europe and is highly prized. They ripen from September to January or February. When ripe, they have a darker brown, marbled flesh and their aroma and taste are much stronger than their Summer counterparts meaning they command higher prices. Fresh English Autumn truffles can be ordered here when in season.

With differences in taste, aroma, season and spore morphology, Summer and Autumn truffles were originally treated as two separate species. Today, the scientific world, informed by molecular (DNA) studies, consider them the same species, with Autumn truffles (Tuber aestivum var. uncinatum) being an autumnal variety of Summer truffle (Tuber aestivum var. aestivum). The differences are now considered to be a consequence of ecological rather than evolutionary factors. The commercial world however, with the differences in ecology, seasonality and price, does differentiate between Summer and Autumn truffles applying the names Tuber aestivum and Tuber uncinatum respectively.